You really do miss your water when it’s gone 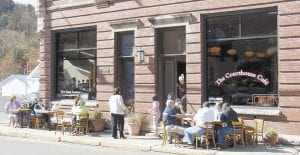 Lunch diners ate from tables on the sidewalk in front of the Courthouse Café Tuesday.

Helen Roberts, of Cowan, said she changed from well water to public water so her family could have access to better water. Now she is upset that the “better” water became contaminated.

Roberts and about 2,000 other public water customers are having to function without the help of water from the City of Whitesburg after petroleum leaked into the water system.

Roberts along with her husband and son are having to go to a relative’s house to bathe and do laundry.

“You can’t buy enough water to do the things you need to do to keep things clean and keep your body clean,” said Roberts.

Roberts, who is the dietary supervisor at Whitesburg Appalachian Regional Hospital, said the water problem has also changed the way she works.

“I work in a kitchen and we’ve had to rework the whole menus and how we do everything,” said Roberts. “We have to be safe. Nothing can be contaminated.” 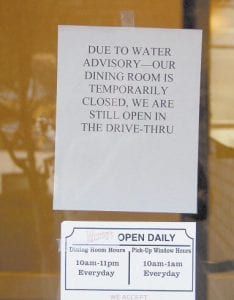 THE SIGN SAYS — This sign on the door of Wendy’s restaurant in West Whitesburg sums up the problems being encountered by many businesses in the city this week. It was not known at presstime when the water might be declared safe.

“It’s denying medical services to some of our patients,” said Caudill. “Like all other businesses around, it’s causing us a large loss in revenue.”

Caudill said MCHC’s dental department is closed down because drills that spray water into the mouths of patients can’t be used. He said bottled water has been used to mop floors and keep hands washed.

Ellen Wright, chief executive officer of Whitesburg Appalachian Regional Hospital, said the City of Whitesburg is providing the hospital with bottled water for patient consumption and a local volunteer fire department is filling portable storage tanks with water for use in hospital maintenance, which is properly prepared for use through the addition of chlorine.

“There are no plans to discharge patients,” said Wright. “The hospital is safely cleaning and providing for patient needs with the combination of bottled water, the water storage tanks, and packaged bath products that can be heated for patient baths.”

Wright said elective surgeries were being canceled initially, but those as well as emergency surgeries can now be safely performed. She said the Whitesburg hospital is getting help in sterilizing equipment from its sister hospital in Hazard.

“This has been a trying time for the entire Whitesburg community and Whitesburg ARH,” said Wright. “However, as always, we have joined together as a community and here on the hospital campus we are working together as a team to ensure that our family, friends and neighbors are taken care of during this time. The operations and ability to provide safe patient care continue and will not be interrupted.”

“There is no way for patrons to wash hands prior to consuming food,” said Garrett. “If they wash their hands in contaminated water there is a possibility the contaminants will get on the skin.”

With the health department suspending dine-in service until the water is deemed safe, customers were left to eat outside the restaurants or take food back to offices and residences.

Employees at the Courthouse Café, located on Main Street in Whitesburg, set up a few wooden tables and chairs outside their restaurant for customer use. Wendy’s in West Whitesburg was also doing brisk business outside.

Signs were taped to the doors of Wendy’s and McDonald’s notifying customers that dine-in service was temporarily suspended. Wendy’s front door was locked by management and the restaurant was only taking drivethru orders.

Stephen Whitaker, manager of Food World in Whitesburg, said because the health department has suspended grocery stores from cutting or processing meat, the store is not able to sell fresh meat and had to throw out $2,000 worth during what normally would be its biggest sales week of the month.

“The hurt on our business is just not what we had as far as (throwing out) fresh meats, it’s the business we will lose from selling meat the rest of the week,” said Whitaker. “We sell the most meats through the first week of the month.”

Whitaker said meat can be cut and processed at its sister store in Neon, but there is no refrigerated truck available to transport the meat to the Whitesburg store.

“When the health department issued an emergency water procedure saying not even to use the water to wash hands, all options are out the window,” said Letcher County Jailer Don McCall. “I have a duty to protect these inmates. I decided that the safest thing for the inmates would be to house them in facilities with safe water.”

McCall said transporting the inmates went “surprisingly smooth.” Three deputy jailers and one deputy sheriff were on each bus. McCall said one bus driver was Roland Craft, constable of District 3. He said the other bus driver, Dean Fields, has more than 20 years experience as a deputy sheriff. A sheriff ‘s deputy followed each bus in a cruiser.

McCall said the cost of transporting and housing the inmates in other facilities is unknown at this time.

“I apologize to the families if they are having to travel farther to see their loved ones who are incarcerated, but I have to put their safety above everything else,” said McCall.