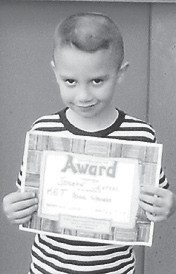 — Joseph Sexton, son of Mark and Katherine Sexton of Whitesburg, a six-year-old kindergarten student at West Whitesburg Elementary School, placed second in the state in the KET Young Writers Contest sponsored by the KET Network. There were more than 600 entries in the contest in grades K-5, and about 60 entries by kindergarten students. The story he wrote was titled “A Hungry Dinosaur Named Fred”. Joseph was presented with a certificate on awards day at his school and will receive prizes from KET when school begins in the fall.