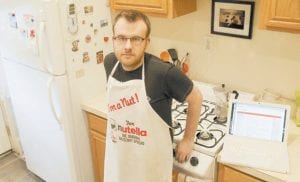 Brian Kraus, who hosts a food blog, poses in his kitchen in Albany, N.Y. Kraus loves to cook but has only one cookbook. When Kraus wanted tips on preparing a whole fish, he headed to the Web and did a “mishmash” of stuff he liked from diff erent sites. (AP Photo/Mike Groll)

Young people immersed in food culture today are as likely to praise a fish taco from a food truck as filet mignon from a fourstar restaurant.

They didn’t read Gourmet magazine — the longtime bible of highbrow culinary taste stopped printing last year. But they do follow blogs and websites that feature everything from straight recipes to goofy fusions to biteby bite dispatches about last night’s dinner. And many young connoisseurs are kitchen amateurs.

“The twentysomethings right now are probably one of the most educated food generations ever. And by that I mean they can talk to you about foie gras or cooking sous vide or the flavor profile of a Bordeaux,” said Cheryl Brown, editorial director of the popular website Slashfood.

“But what they can’t do is truss a chicken or cook a pot roast. So there’s this funny balance of having an amazing breadth of food knowledge but not having the kitchen basics to back it up,” she said.

Try to imagine a young Julia Child showing viewers how to make awesome 2-minute sashimi burgers or Robert Parker blogging about Red Bull and reisling for an idea of how attitudes have changed. Whether this amounts to a refreshing democratization of hoity-toity food culture or an invasion of “foodiots” depends on your point of view.

But it’s clear that Internet culture, with its tendency to knock down old-guard authority, continues to be the driving force. Consider cookbooks.

Cooking enthusiasts traditionally had shelves groaning with cookbooks, maybe old reliables like “The Joy of Cooking” mixed with a Moosewood offering. David Kraus, a 24-year-old from Albany, N.Y., loves to cook but has only one cookbook. When Kraus wanted tips on preparing a whole fish, he headed to the Web and did a “mishmash” of stuff he liked from diff erent sites.

“I don’t really have cookbooks, probably because in our generation we’re more for the dynamic media,” Kraus said. “We want people to have a comment on our recipes.”

Kraus posts his creations on his EatInAlbany.com blog, one of a mind-boggling number of food sites running the gamut from the heavily trafficked Epicurious and Food2 to bloggers like himself.

If it’s about food, it’s online: Tips on slicing flank steak? Check. Recipes for fugu and frog croquettes? Yes and yes. How about what 34-year-old New York City librarian Emily Drabinski had for lunch yesterday? You bet.

“I guess I wanted a reason to put a stake down in my day, every day,” explains Drabinski, who blogs at WhatIAteForLunchAndWhy. com.

Much of this information is useful, or at least interesting. But in a world where anyone can contribute to food discussions, anyone does. Highbrow types are hardly immune, contributing reports about eating fried squid or tuna with wasabi mayonnaise.

Laura Shapiro, a culinary historian and author of “Julia Child: A Life,” sees it more like a best-oftimes worst-of-times era in food culture. The Web provides an unprecedented range of useful expert culinary advice. But there’s also “these dimwits who go to 16 restaurants a week and say, ‘We had this there, but couldn’t get in there.’ Who cares?”

What seems like narcissism to some comes naturally to a generation that grew up on food TV shows that emphasized oversized personalities (think of Emeril’s “Bam!”) or turned cooking into a game (make this squid into a tasty meal in an hour!).

Mark Levine, site director for Food2, notes that their core audience of college-educated young women grew up in a world where they could buy sushi at the grocery store and eat pad thai in the school cafeteria. Haughty food culture is history. So Food2 — a kid sister to Scripps Networks’ Food Network — features recipes along with posts along the lines of 15th Annual Manitou Springs Fruitcake Toss.

“We didn’t want to take ourselves too seriously,” Levine said.

That boundary blurring refl ects the spirit of the times. It’s not just the increasingly eccentric fusion cuisines that have brought the world curry chitlins and the Wok A Mole Chinese-Mexican restaurant in Texas.

Highbrow and lowbrow don’t mean what they used to either when food trucks serve Marrakech lamb with couscous and fancy restaurants feature hamburgers.

This mashed-up mix might be best symbolized by the Mc- Nuggetini, the tongue-in-cheek cocktail that made Web video stars out of the Los Angeles duo of Alie Ward, 31, and Georgia Hardstark, 29. Yes, the cocktail includes a McDonald’s entree and it’s as gross as it sounds. But the young pair’s goofy presentations of the McNuggetini and other gag-worthy concoctions make the meat-and-booze idea easier to swallow.

For all their stomach-churning mixology, Hardstark still prides herself on her cooking and loves a good meal. Like a lot of young people, she just doesn’t want to be a snob about it.

“Our entrees happen to be shameless and revolting,” said Ward, “but we both have foodie sensibilities.”