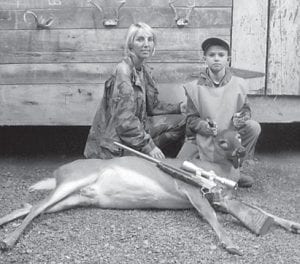 — Kane Gibson, a nine-year old fourthgrade student at Cowan Elementary School, killed this doe during the recent youth season while hunting with his mother. He is the son of Owen and Nikki Gibson of Cowan, and the grandson of Leonard and Kay Boggs, also of Cowan, Codell and Debbie Gibson of Craft’s Colly, and Carlene and Kenneth Oliver of Columbia. He has an older brother, Owen II, 11.