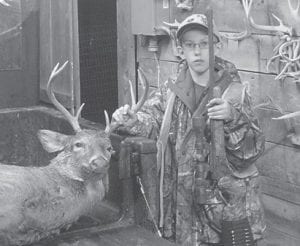 Owen Gibson II killed an eight-point buck during the recent gun season. He is an 11-year-old sixth-grade student at Cowan Elementary School. He is the son of Owen and Nikki Gibson of Cowan, and the grandson of Leonard and Kay Boggs, also of Cowan, Codell and Debbie Gibson of Craft’s Colly, and Carlene and Kenneth Oliver of Columbia.