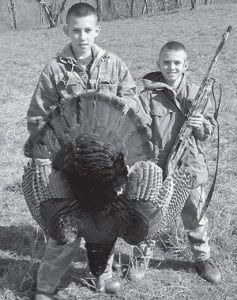 — Kane Gibson killed his first turkey during the recent youth weekend. He is the 11-year-old son of Owen and Nikki Gibson of Cowan, and a grandson of Leonard Boggs, also of Cowan, and the late Kay Boggs, Carlene and Kenneth Oliver of Columbia, and Codell Gibson and Debbie Gibson of Craft’s Colly. He is pictured with his older brother Owen II, who called in the turkey for him.