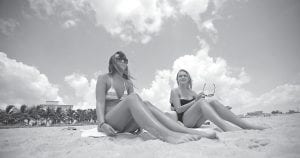 Morgan Weese, 23, left, and Brittany Locke, from Tempe, Ariz. sunbathed late last week in Miami Beach, Fla. Weese said she used to be “obsessed” with tanning during high school, but now knows the dangers associated with tanning too much — including skin cancer. (AP)

The warnings about skin cancer from too much sun don’t seem to be getting through.

Half of U.S. adults under 30 say they have had a sunburn at least once in the previous year — about the same as a decade ago, according to a new government survey. In fact, the modest progress reported five years ago has been wiped out.

Not only that, but women in their 20s are going to tanning salons almost twice a month on average.

Experts say that even one blistering burn can double the risk of developing melanoma, an often lethal form of skin cancer.

The study was conducted by the Centers for Disease Control and Prevention and was based on a 2010 survey of about 5,000 U.S. adults ages 18 to 29.

Researchers don’t know for sure why the sunburn rate picked up again, said Dr. Marcus Plescia, director of the CDC’s Division of Cancer Prevention and Control.

The CDC found that more than one-third of those surveyed said they use sunscreen when they are out in the sun — a modest increase from 2005. But some experts said the increasing rate of sunburns suggests many people are not putting on enough sunscreen or are not re-applying it adequately.

The CDC has also released the results of a survey on the use of tanning beds, booths or sun lamps, and Lichtenfeld said of the findings: “I am astounded.”

While about 6 percent of adults of all ages said they had done indoor tanning in the previous year, the rates were much, much higher among young white women: about 32 percent among those ages 18 to 21.

Also, women in their 20s said they tanned indoors more than 20 times in the previous year, on average.

A similar survey in 2005 found about 27 percent of young women said they had done indoor tanning.

Several experts said there is no longer significant scientific debate that indoor tanning causes cancer. In 2009, tanning devices were classified as carcinogenic by the World Health Organization, which analyzed 20 studies and found the risk of melanoma rose 75 percent in people who started indoor tanning before age 30.

“It’s not a question of whether tanning beds cause cancer anymore. We’ve been able to prove that,” said Dr. Jerry Brewer, a Mayo Clinic dermatologist and researcher.

But Joseph Levy, executive director of International Smart Tan Network, representing the tanning salon industry, said the WHO finding was based on old and flawed studies. He also noted the risk of melanoma is very small.

“Saying categorically that (ultraviolet light) exposure is harmful and should be avoided is like saying that water causes drowning, and therefore we should avoid water. It’s a totally misleading oversimplification,” Levy said in an email.

Indoor tanning took off about 30 years ago. There are nearly 22,000 salons across the U.S., serving an estimated 28 million customers, according to IBISWorld, an industry research firm .

About 76,000 melanoma cases will be diagnosed in U.S. adults this year, and about 9,200 people are expected to die of the disease, according to the cancer society. The rates for other skin cancers have been rising as well.

The CDC’s Plescia said tanning beds are driving “an epidemic in the making.”

Others shared that concern.

“It’s the sunburn you got when you were 18 that leads to the cancer you get when you’re 40. That sunburn will come back to haunt you,” warned Dr. Zoe Draelos, vice president of the American Academy of Dermatology.

Clearly, many people have recognized the risks of tanning.

Witness the public revulsion last month over the case of a deeply bronzed New Jersey woman arrested for allegedly taking her 5-year-old daughter into a tanning booth. Police said the kindergartner suffered a burn. (The mother denied taking her into the booth and said the girl got sunburned outdoors.)

To be safe, experts say to avoid direct sun between 10 a.m. and 4 p.m. or cover your body. And sunscreen needs to be applied often.

Danielle Itgen, 22, said skin cancer runs in her family but she still likes to sunbathe in the summer — while wearing sunscreen. “I feel like when I’m really pale, I look sick,” she said during a visit to Miami Beach, Fla.

Elizabeth Garrido, 40, used to sunbathe every day when she was younger and still goes to the beach twice a week to soak up the rays.

Does she worry about skin cancer?