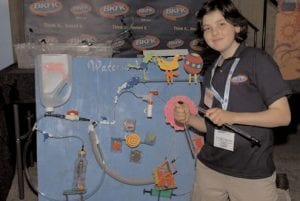 Most kids feel fear, anticipation or boredom while being tested for asthma at the doctor’s office. But Russell Moore, 13, felt inspiration.

Russell, from Trumbull, Conn., took one look at the complex system of tubes and pumps on the asthma nebulizer his doctor was using and thought, “Hey! This could be a toy,” he told Time For Kids. He went home and designed the Waterworks Building Toy, a set of pipes, tubes and connections kids can use to build their own water-moving machine.

The Waterworks was so innovative and unique that it earned Russell a grand prize in the 2007 Invent-A-Toy World Games. By Kids For Kids, a company that works to help young entrepreneurs succeed, organizes the event every year. This year grand prizes were awarded to Russell and two other inventors, Eddie Boler, 8; and Brooke Rogers, 6. The three winners each received a contract, or agreement, to help them license and patent their toys and a $5,000 U.S. savings bond. In addition, they each chose an inspirational teacher to receive a $1,000 bond. They also won a trip to New York City to attend the awards ceremony.

Eddie, below, from Richardson, Texas, invented Xoomball, a twist on the standard board game that uses

air pumps to blow Ping-Pong balls into holes on a board to score points. “It seemed like a cool idea,” Eddie says. “I want to keep inventing things.”

Brooke, below, from Wilton, Calif., says she loves camping and

singing songs around the campfire

but felt frustrated when it was raining or her parents were too busy to build a fire. She invented Kipsy’s Campfire Campout, a toy campfire kids can use to pretend they are camping indoors.

“I used wood to build it, and my mom helped,” Brooke says. “Now I can camp out in the living room.” Brooke wants to become a chef someday, but for now, she’d like to invent more items for kids.

By Kids For Kids received more than 10,000 contest submissions, which the judges narrowed down to 10 national finalists and the three grand prize winners. Company founder Norm Goldstein says that businesses need to tap into the creative minds of young people. “They bring a fresh view of the world,” he says. “Kids just say, ‘Why not?'” 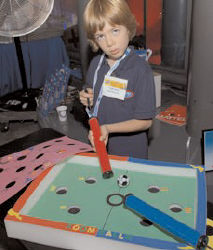 As for Russell, he’s off to meet with FAO Schwartz and other toy companies. He urges young inventors to keep at it and not become discouraged: “Even if you have just the tiniest bit of doubt, you just have to go with it.”

For information about how to enter next year’s contest, visit www.bkfk.com/challenge. 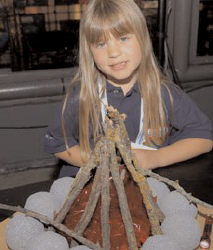