Young Jenkins archer is now among the nation’s very best 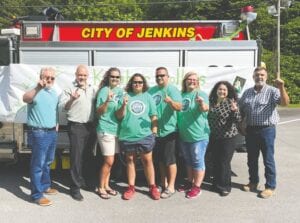 Jenkins Elementary School archer Kimber Collins has brought new championship accolades back to her hometown, this time from a much larger stage.

Collins, a rising sixth-grader at Jenkins, achieved several first-place finishes in tournaments sponsored by the National Archery In the Schools Program (NASP) and the International Bowhunting Organization (IBO) last weekend in Myrtle Beach, South Carolina. Among those winning finishes were first-place rankings in the NASP Championship among both elementary girls and fifth-grade girls. The first-place rankings in the NASP Championship, which is the organization’s marquee tournament for the year, came by way of a score of 288 out of a possible 300. That score included 20 bull’s eyes, worth 10 points each.

Collins ranked 23rd overall out of the 759 archers who took part in the NASP Championship.

“Greatness rarely just happens,” Johnson said. “Kimber shoots 200-plus shots every day. She has shown that through hard work and dedication, we can do things that otherwise would seem impossible.

Collins’s performance last Friday and Saturday set a new bar for Jenkins Independent School’s archery program, one which Collins, herself, had already set. Early this spring, Collins became the school’s first-ever archer to quality to shoot in the state archery tournament. After placing first in categories in the state shoot, she qualified to participate in May in the NASP National Championship, where she also ranked first out of more than 1,500 elementary school girls.

“Kimber has just finished her 5th-grade year,” he continued. “She’s just getting started on this journey. I look forward seeing where this takes her.”

NASP President Tommy Floyd said Collins’ performance is an example of how archers from small schools such as Jenkins, which boasts a student population of around 400 district-wide, can compete on a “level playing field” when paired against archers from much larger schools.

“Our archers shoot a common bow, a common arrow …, and regardless of where you come from … the playing field is even,” Floyd said. “(Collins’s) success is a great example of how competitors who shoot in open tournaments can qualify for our national tournaments.

“ We’re proud of the opportunity that so many kids are taking advantage of,” Fields said.

“I believe that everyone has within them the potential to be great at something,” Johnson said. “As educators, there’s nothing more rewarding than helping a student to identify, cultivate, and grow their talent.”

“My goal as superintendent is to show our students that just because you come from a small school in a small town, that doesn’t mean you can’t do great things,” Johnson said. “Kimber’s accomplishments are a shining example of this.”

Portions of the tournaments in Myrtle Beach welcomed all school-aged archers, regardless of finishes or rankings in state and national competitions. Friday’s NASP- IBO 3D Open tournament allowed archers to enter the shoot for a chance to qualify and advance to the 3D Championship tournament later in the day. Collins ranked first in two categories — elementary girls and fifth-grade girls — in the open tournament on Friday, ranking seventh overall out of 87 participants. Later that day, in the 3D championship tournament, she placed second among elementary girls and second among fifth-grade girls, and 98th overall for female competitors.

Collins qualified to shoot in Saturday’s NASP Championship thanks to her national championship win.

A parade through Jenkins was held for Collins Tuesday evening upon her return home to Letcher County.