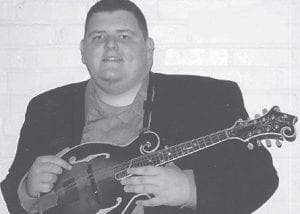 Letcher County, Kentucky has many talented people. We have artists, sculptors, authors, musicians, quilters — many people who are gifted like this young musician, Nickey Joe Johnson, from Neon right here in Letcher County. He is one very talented young man.

He says he is from a musical family. his aunts, uncles and father are all musicians. He said his father taught him the basic chords and he picked up the rest. He has been playing music since he was four years old. He is an awesome mandolin player and has a beautiful voice.

He plays with the band Coal Town Boys. They treated everyone at the Hemphill Community Center Feb. 6 with their music. They played to a full house and were to be there again for the Valentine’s Dance.

Coal Town Boys is one of the most talented groups of young local fellows that has come out of eastern Kentucky. They have a unique sound that is awesome.

Nickey Joe is only 17 years old. He is a senior at Jenkins High School. I asked him if he had college on his mind. He said he might forego college at this time and pursue his musical career.

Coal Town Boys has a tour scheduled for many states in 2009, Texas, Arkansas, Michigan, Virginia, West Virginia, Georgia and many other places, and a Canadian tour in 2010. He says college can wait awhile if his career takes off — and I believe it will.

I asked if he has a girlfriend and he said, “No, I don’t have time.” As much talent as this young man has, I don’t think he will have any trouble finding a girlfriend when he is ready.

I am so proud of our young people who try to follow their dreams of a career and make something out of their lives. The support and pride that his parents have when he is performing show in their faces.

You are going to hear many good things from this group Coal Town Boys and one of these gifted young men is from Letcher County. I am proud of him.