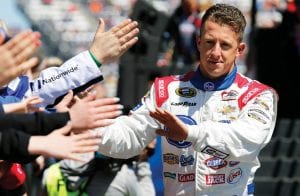 It’s been all the usual suspects in victory lane through the first six NASCAR races this season.

Although Kyle Busch swept the two national races at Martinsville Speedway over the weekend, the tricky Virginia track gave other drivers a chance to shine and show their improvement.

Among the biggest surprises were A.J. Allmendinger and Kyle Larson, who finished second and third Sunday. Austin Dillon was fourth, Brian Vickers finished seventh. And despite her 16th-place finish, Danica Patrick ran inside the top 10 during a stretch of the race.

It was a surprising change of faces at a track where the same drivers typically dominate. Jeff Gordon earned his ninth win at Martinsville last fall, Jimmie Johnson is an eight-time winner and Denny Hamlin has collected five of the grandfather clocks that go to the winner.

The new faces at the front were not lost on Allmendinger, who has used a pair of top-10 finishes the last two races to climb from 20th to 12th in the Sprint Cup standings.

“I passed Jimmie Johnson like five times at Martinsville — that’s pretty cool!” he said after climbing from his car.

So, is there a new wave of potential championship contenders closing in on the favorites?

ALLMENDINGER: He made the Chase for the Sprint Cup championship two years ago based on his victory on the road course at Watkins Glen. An ace on the road courses, winning one of the two races each year seemed to be Allmendinger’s only shot at making the Chase field. So when he failed to win either last year, his JTG-Daugherty team was shut out of the 16-driver Chase field and Allmendinger was deeply disappointed.

He can be hard on himself, and his mood can spread to the team. So Allmendinger has made an effort to stay upbeat and match the enthusiasm of first-year crew chief Randall Burnett. Allmendinger believes the No. 47 Chevrolet has a much more wellrounded team this season after a series of personnel moves.

“We’re getting there. There’s ups and downs. This is a long season,” he said. “The biggest thing, especially with a team like ours, is when you have a good race car, you’ve got to capitalize on it.”

LARSON: Martinsville has been one of the most difficult tracks for Larson, and he missed last year’s spring race when he passed out from dehydration a day before the event. In four previous races at Martinsville, Larson’s best finish was 19th.

A case could be made that Larson, now in his third Cup season, was last year’s biggest disappointment. He had a strong close to his rookie year, building on the hype surrounding him as NASCAR’s next star, but he’s still seeking his first Cup win.

A lot of Larson’s problems have been mental errors, and in a contract year with Chip Ganassi Racing, he could be trying to show maturity on and off the track. He took a big step with his strong Martinsville showing a day after he finished fourth in the Truck Series race.

“I was able to do double duty … and I think that defi- nitely helped me get my rhythm,” Larson said. “In the past, it’s been my worst racetrack on the schedule, so to get a top-three finish here feels great, feels like a win, to be honest, and hopefully this is a good momentum shift that we need.”

DILLON: Somewhat overshadowed by Larson — they were both part of the 2014 rookie class — he’s been one of the most consistent drivers this season. Through six races, Dillon has four top-10 finishes and is a surprising eighth in the standings.

Most impressive about Dillon’s day at Martinsville: He started 29th and drove his way through the field, even sparring on track with Richard Childress Racing teammate Paul Menard. He complained about Menard on his team radio, but the two had a friendly exchange after the race.

“I’ve got to learn to keep my mouth shut on the radio. That’s part of racing. I’m a fiery guy,” Dillon said. “Sometimes you’ve just got to grow up a little bit, but It’s nice to be running up front.”

VICKERS: Perhaps the most interesting finish of the day belonged to Vickers, who earned the best result this year for Stewart- Haas Racing’s No. 14 team.

Vickers has been the replacement driver for injured Tony Stewart in four races, while Ty Dillon drove the other two. The lack of consistency with the driver, mixed with a first-year crew chief, has made it hard for the team to build any momentum.

“We’ll take a seventh and move on. The team is getting stronger every week,” Vickers said. “I’m proud of those guys and it’s going to be a strong team.”

Vickers is back in the car this weekend at Texas Motor Speedway, but after that, nothing is clear for the No. 14 Chevrolet. It’s also not clear when Stewart will be healthy enough to drive.