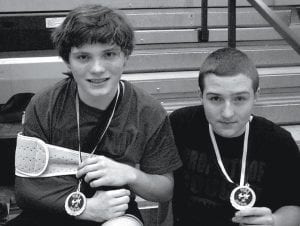 Ethan Riley (left) and Hunter Holbrook earned silver medals while competing for the Letcher County Middle School wrestling team at the Woodford Invitational Tournament in Versailles on December 18. Riley wrestled in the 150-pound class while Holbrook competed in the 165-pound class.