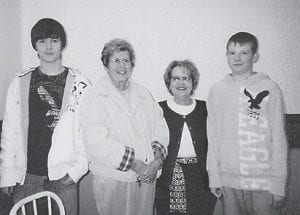 Whitesburg Middle School students Zack Joseph and James Craft were guests at the March meeting of the Pine Mountain Chapter of the Daughters of the American Revolution. The two presented their writings at the “Honoring the Future” program. Zack wrote a biographical piece honoring his grandfather, the late James Breeding, while James wrote a fictional story of the Vietnam War era entitled “The Captive”. Pictured are (left to right) Zach Joseph and his grandmother, Shirley Breeding, and Mahala Frazier and her gr andson, James Craft.