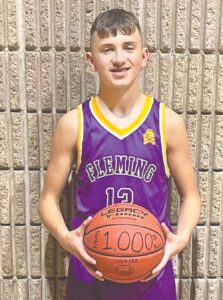 Gunner Holbrook became the first-ever member of the 1,000-point club at Fleming-Neon Middle School in a recent game at home against Millard. Holbrook, an eighth-grader now in his third year with the Pirates, hit the milestone on a three-point basket in the win. He is the son of Eric and Brooke Holbrook.