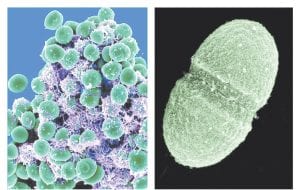 At left, an image provided by the National Institute of Allergy and Infectious Diseases (NIAID) shows a clump of Staphylococcus epidermidis bacteria (green) in the extracellular matrix, which connects cells and tissue, taken with a scanning electron microscope. At right, undated handout image provided by the Agriculture Department shows the bacterium, Enterococcus faecalis, which lives in the human gut, and is just one type of microbe that will be studied as part of NIH’s Human Microbiome Project. (AP Photo/NIAID, Agriculture Department)

They live on your skin, up your nose, in your gut — enough bacteria, fungi and other microbes that collected together could weigh, amazingly, a few pounds.

Now scientists have mapped just which critters normally live in or on us and where, calculating that healthy people can share their bodies with more than 10,000 species of microbes.

Don’t say “eeew” just yet. Many of these organisms work to keep humans healthy, and results reported from the government’s Human Microbiome Project define what’s normal in this mysterious netherworld.

One surprise: It turns out that nearly everybody harbors low levels of some harmful types of bacteria, pathogens that are known for causing specific infections. But when a person is healthy — like the 242 U.S. adults who volunteered to be tested for the project — those bugs simply quietly coexist with benign or helpful microbes, perhaps kept in check by them.

The next step is to explore what doctors really want to know: Why do the bad bugs harm some people and not others? What changes a person’s microbial zoo that puts them at risk for diseases ranging from infections to irritable bowel syndrome to psoriasis?

Already the findings are reshaping scientists’ views of how people stay healthy, or not.

“This is a whole new way of looking at human biology and human disease, and it’s awe-inspiring,” said Dr. Phillip Tarr of Washington University at St. Louis, one of the lead researchers in the $173 million project, funded by the National Institutes of Health.

And like environmental ecosystems, your microbial makeup varies widely by body part. Your skin could be like a rainforest, your intestines teeming with different species like an ocean.

Scientists have long known that the human body coexists with trillions of individual germs, what they call the microbiome. Until now, they’ve mostly studied those that cause disease: You may recall health offi cials saying about a third of the population carries Staphylococcus aureus harmlessly in their noses or on their skin but can infect others.

But no one knew all the types of microbes that live in healthy people or where, and what they do. Some 200 scientists from nearly 80 research institutions worked together for five years on this first-ever census to begin answering those questions by unraveling the DNA of these microbes, with some of the same methods used to decode human genetics. The results were published Wednesday in a series of reports in the journals Nature and the Public Library of Science.

First, the researchers had to collect tissue samples from more than a dozen body sites — the mouth, nose, different spots of skin, the vagina in women, and from feces. Then they teased apart the bacterial DNA from the human DNA, and started analyzing organisms with some daunting names: Lactobacillus crispatus, Streptococcus mitis, Corynebacterium accolens.

Our bodies are thought to be home to about 10 bacterial cells for every human cell, but they’re so small that together microbes make up about 1 percent to 3 percent of someone’s body mass, explained Dr. Eric Green, director of NIH’s National Human Genome Research Institute. That means a 200-pound person could harbor as much as 6 pounds of bacteria.

There are about 22,000 human genes. But the microbes add to our bodies the power of many, many more — about 8 million genes, the new project estimated.

Those bacterial genes produce substances that perform specific jobs, some of which play critical roles in the health and development of their human hosts, said Dr. Bruce Birren of the Broad Institute of MIT and Harvard, another of the project’s investigators. Genes from gut bacteria, for example, lead to digestion of certain proteins and fats. They also produce certain beneficial compounds, like inflammation-fighting chemicals.

Another surprise: There isn’t one core set of bacteria that perform those functions. A wide variety can do the same jobs, the researchers found.

That’s fortunate considering people carry a customized set of microbes, one that varies dramatically depending on where you live, your diet and a host of other factors. Your microbial zoos also can change, such as when taking antibiotics that kill infectioncausing germs as well as good intestinal bacteria that may be replaced with different but equally effective bugs.

“We don’t all have the same bacteria although they all seem to have been organized to do the same things,” Birren said. It may be that our lifestyle and environment “induces each of us to have arrived at a solution that works for us.”

With this first snapshot of what normal looks like, studies now are under way to see how the microbes differ in people with certain diseases, in hopes of learning how to prevent or treat the illnesses.

Consider the intestinal superbug named C. difficile that people all too often catch while they’re in the hospital, and that sometimes kills. Washington University’s Tarr wants to know what mixture of gut bacteria can fend off the diarrhea-causing germ or make it more likely to infect — so that doctors might one day know who’s more vulnerable before they enter a hospital.

Also, researchers at Baylor College of Medicine reported last week that the kind of bacteria living in the vagina changes during pregnancy, perhaps to give the fetus as healthy a passage as possible. Previous research has found differences in what first bacteria babies absorb depending on whether they’re born vaginally or by C-section, a possible explanation for why cesareans raise the risk for certain infections.

All new information in some ways is humbling, because it shows how much more work is needed to understand this world within us, noted infectious disease specialist Dr. David Relman of Stanford University, who wrote a review of the project’s findings for the journal Nature.

For example, the project included mostly white volunteers who live around Houston and St. Louis. Relman said more work is needed to define a normal microbiome in people with different racial, ethnic and geographic backgrounds.

And there are many remaining questions about how these microbes interact with human genetics.

“We are essentially blind to many of the services that our microbial ecosystems provide — and on which our health depends,” Relman wrote.