Your ‘check engine’ light is talking. Are you listening? 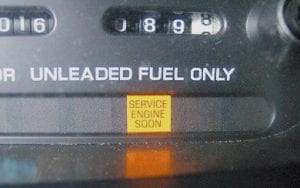 An illuminated service engine light is shown in this photo. Unraveling the mystery of the enigmatic little lamp is considerably easier – and usually less painful – than most people think. (AP Photo/Josh Dickey)

It’s just a little amber lamp in the dashboard, a tiny bulb behind a plastic pane the size of a postage stamp, inscribed with a very big message.

Depending on the car’s make and model, it might say “CHECK ENGINE,” as if you possessed the ability to pry open the hood and make a snap diagnosis. Others say “SERVICE ENGINE SOON,” worded just vaguely enough to enable us procrastinators.

No matter how it’s communicated, the effect can be unnerving. Who knows what evil lurks in the hearts of engines? Only the computer knows.

But unraveling the mystery of the enigmatic little lamp is considerably easier – and usually less painful – than most people think. While there’s little reason to shut the vehicle off and sprint for the nearest mechanic, the light shouldn’t be ignored for long.

“It’s your car’s way of telling you, ‘You might be meeting Larry the tow-truck guy soon,”‘ says Bill Jaap, owner of Good Carma VW and Audi Repair in Minneapolis. “It’s a warning, and it can be menacing. Even though the car still runs well, I think it’s a good idea to bring it in.”

The lamp’s formal name is the malfunction indication light, or MIL.

Today’s cars are equipped with dozens of sensors and a computer that make on-the-fly adjustments to maximize fuel efficiency and minimize carbon emissions. If a sensor detects something amiss, it sends a code to the computer, and voila: “CHECK ENGINE.”

That code is stored in the computer – and the light stays on – until it’s retrieved. And that part is surprisingly simple: It’s just a matter of plugging a handheld gadget into a connector that’s usually located beneath the steering column.

What Not To Do

Panic. Unless your car is idling rough, starting hard, hesitating or smoking, it’s OK to keep driving when the light comes on. (In a few models, the light will flash or turn red if the problem is serious. If this happens, DO pull over asap.)

But it’s unwise to ignore it. For one thing, the problem will likely mean a failed emissions inspection down the line. For another, many of these small, undetectable problems can cause costly engine damage if left untreated.

“It’s kind of a false signal to some people who maybe have been driving around with it on for a year,” Jaap says. “Even though the problem can be very slight, my opinion is that you shouldn’t get desensitized to it. It’s on for a reason.”

Tip: Don’t pay a mechanic to read the code unless the shop offers to credit the money back in related repairs. The service is easy enough to get for free.

Obviously, if the car is under warranty, take it to the dealer. But with older cars, many mechanics and auto-parts stores will retrieve the code gratis.

Do-it-yourselfers can purchase code readers for $50 to $200, and some software programs will turn your laptop into a scan tool with a special connector. Some readers give a number that needs to be cross-referenced; more expensive scanners will display details.

But this is where a little knowledge can be a dangerous thing, Jaap cautions. The readings are often vague, and won’t necessarily tell you what needs doing.

“It can be even more expensive to try and guess what’s going to fix it, just based on what a scan at an auto-parts store tells you,” Jaap says. “That’s kind of hearsay and conjecture, and I’d go broke if I did that.”

At the very least, the code can help you (or your mechanic) decide whether it’s something that can be put off for a bit.

Why All The Rigmarole?

Said Deep, a spokesman for Ford Motor Co., says indicators on modern cars are getting more sophisticated, telling drivers, for instance, how close they are to needing an oil change, or when a tire is getting low.

“But there’s a limited amount of real estate on the instrument panel,” Deep says, “and there’s a certain amount of information overload that we want to avoid.”

Carmakers are only adding messages that drivers are comfortable dealing with – specific messages for a headlight out, say, or low washer fluid.

“When we get into computer operations, like delicate air/gas mixture issues or the way your transmission shifts, that’s something we think is more suited for a trained mechanic with the proper equipment,” Deep says.

Before the 1980s, the dashboard gave gearheads all the vital signs they needed to keep moving down the road: fuel level, oil pressure, temperature, RPMs and, in some cases, alternator voltage.

But these dials revealed nothing about the intricate balances of fuel mixture or carbon emissions. As smog became a political issue in the early 1980s, the federal government intervened with emissions control standards. Making a car perform up to snuff got a lot more complicated.

There are endless ways our cars can run afoul of these standards; without sensors to point the way, mechanics would spend more time diagnosing than fixing. And other than an annual emissions inspection, how would Earth-friendly drivers know their vehicle was an environmental menace?

In that vein, perhaps it’s only fair to think of the MIL as your friend – the automotive equivalent of a canary in the coal mine.

“Older cars were simpler, but we’ve come a long way,” Jaap says. “I have to say that it’s really easier to diagnose the modern engine – if you have the right tools. Its an all-around better world.”