Your family will eat up this ham 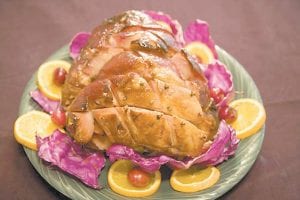 I’m bringing my special Sugar and Spice Ham to our family gathering. It’s a recipe that everyone loves. Pre-packaged hams that are brined, glazed with brown sugar and honey, spiral cut and baked are expensive. For a ham that’s much more budget-friendly, I suggest that you try this delicious recipe that uses the shank or picnic portion of the ham.

1 ( 7 pound) smoked
ham, half-cut, shank end,
picnic or shoulder portion
(bone in or out)
2 quarts cold water
2 cups sugar
1 cup honey
1/2 cup brown sugar,
packed
1 (6 ounce) can frozen
orange juice concentrate,
thawed
2 teaspoons ginger
1 teaspoon dry mustard
2 tablespoons whole
cloves
To prepare the ham:
Trim off some of the fat,
leaving a 1/4-inch layer.
Score the remaining layer of
fat into a diamond pattern
by cutting 1/4- to 1/2-inch
deep into the meat, forming
1 inch to 2 inch squares. Not
only does scoring look nice,
it allows any remaining fat
to render from the ham and
provides a greater surface
area for the glaze to stick to.

To brine the ham: Cut
crosswise slits all around the
ham, about 1/2 inch apart,
halfway through ham to
where knife touches bone,
if any. Place the water in a
deep bowl, a large pot or a
large, re-sealable food-safe
plastic bag. Stir in the sugar.
Soak the ham in the brining
liquid for at least 2 days in
the refrigerator, turning the
ham once or twice each day.
Drain off the brining liquid.
To glaze the ham: Place
the ham in a roasting pan
lined with enough foil overlapping the edges to wrap
it completely. Mix together
the honey, brown sugar,
orange juice, ginger and dry
mustard in a small bowl.
Pour the mixture all over
the pork and rub the glaze
evenly over the ham. Stick
the cloves in the diamondshaped slits on the top of the
ham. Wrap tightly with the
foil. After glazing, it’s best to
allow the ham to sit at room
temperature for 1-2 hours
before cooking.
To bake the ham: Heat
oven to 200 F. Bake the ham
for 6 to 7 hours or until
done, occasionally unwrapping and basting the ham
with the glaze and any liquids that may have accumulated in the foil. For a
slightly crisper skin, unwrap
the ham and bake at 450 F,
about 15 minutes.