Your guide to the new fall TV season 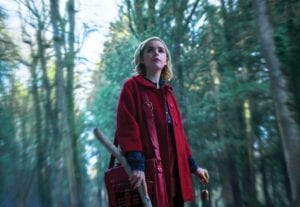 This image released by Netflix shows Kiernan Shipka in a scene from “Chilling Adventures of Sabrina,” premiering on Oct. 26. (Diyah Pera/Netflix via AP)

There’s so much television to watch or pretend to watch — have you really followed all of wrenching “The Handmaid’s Tale” or even heartwarming “This Is Us”? — the guru who coined the term “peak TV” is upping the ante.

John Landgraf, the erudite chief executive of FX Networks, warned that TV’s golden age may be morphing into a gilded one, borrowing Mark Twain’s zinger aimed at the late 19th-century’s crass excess.

Harsh! But it’s true that TV has reached superstore proportions: Streaming, cable and broadcast are on track to surpass the record 487 shows they fielded last year, with 300-plus shows already out by mid-2018 per an ongoing FX tally.

The fall TV season offi- cially kicks off this week and even avant-garde streaming platforms, which release ambitious shows nonstop, are part of the traditional September hoopla once owned by broadcast networks.

So how to find quality goods? You might consider these tips brainstormed with TV and popular culture professor Robert Thompson of Syracuse University.

— Do your homework. Viewers who once leisurely browsed through the schedules of broadcast networks for free now face a dizzying number of fee-based platforms and shows. Trusted publications and bloggers can help you sort through them.

— Break out of your comfort zone. “Take a percentage of your viewing and watch things you think you’re not going to like,” Thompson says. Cable and streaming lean toward gourmet fare and networks dish out comfort food, but both can yield surprises.

— Don’t judge a TV series by its cover, aka the pilot episode. It introduces characters and provides a blueprint for where it intends to go, a heavy lift. It’s a rare bird like “This Is Us” that starts out precisely realized.

— Follow the work of stars you like but keep producers and writers in mind, too. When “Mad Men” creator Matthew Weiner unveils new anthology series “The Romanoffs” Oct. 12 on Amazon Prime Video, admirers of his late, lamented AMC drama will want to tune in.

Which leads us to this fall’s newcomers, a mix of “yes,” ‘’maybe” and “why?” Here’s a roadmap to a season that has something for everyone, and too much for all.

Julia Roberts, the epitome of big-screen star power, is following the path beaten by Nicole Kidman and others to intriguing smallscreen material. For Roberts, the lure is Amazon’s podcast-based psychological thriller “Homecoming,” in which she plays a social worker for returning soldiers. Nov. 2.

Jim Carrey stars in his first TV series, Showtime’s “Kidding,” created by Dave Holstein (“Weeds,” ‘’Raising Hope”) and with director Michel Gondry (“Eternal Sunshine of the Spotless Mind”) on board for several episodes of the dark comedy. Airing now.

Jennifer Garner (“Alias”) returns to her TV roots with HBO’s “Camping,” an outdoor test of marriage based on the British comedy and produced by Jenni Konner of “Girlfriends.” David Tennant (“Doctor Who”) co-stars. Oct. 14.

“Magnum P.I.” is yet another blast-from-the-past CBS title, but original star Tom Selleck is staying put on “Blue Bloods” while Jay Hernandez steps into the title role. A 21st-century twist: Estate caretaker Higgins is a woman. Sept. 24.

“Murphy Brown” and the original cast topped by Candice Bergen return in the CBS sitcom that jousted with politicians during its 1988-98 run. Creator Diane English is back and ready to enter the Trump-era fray. Sept. 27.

“The Conners” is ABC’s attempt to salvage a hit show and jobs from the wreckage of last season’s revival of “Roseanne.” With Roseanne Barr out, John Goodman, Sara Gilbert and other cast members take center stage. Oct. 16.

IS THERE AN ECHO IN HERE?

The success of NBC’s emotional rollercoaster “This Is Us” has not gone unnoticed, so prepare to hang on for more ups and downs.

In ABC’s “A Million Little Things,” a group of friends are shocked into examining their lives after one of them dies, “discovering that friends may be the one thing to save them from themselves,” as the network put it. The dearly departed (Ron Livingston) is seen in flashbacks, a comfortably familiar story device for “This Is Us” fans. Sept. 26.

Brandon Micheal Hall (“The Mayor”) stars as a radio host and atheist who gets a wakeup call in CBS’ “God Friended Me.” It takes the form of a social-media friend request that’s apparently from on high and comes with demands. Sept. 30.

NBC will counter at midseason with “The Village,” set in a Brooklyn apartment building where “sharing walls means sharing lives.” Presumably it’s not in the neighborhood of M. Night Shyamalan’s 2014 horror film of the same title. Date to be announced.

Ryan Eggold (“The Blacklist”) is a rule-breaking doctor in a medical center patterned after New York City’s Bellevue, among the first of America’s public hospitals, in NBC’s “New Amsterdam.” Sept. 25.

Nathan Fillion (“Castle”) stars in ABC’s “The Rookie” as a man whose midlife crisis inspires him to become the Los Angeles Police Department’s oldest newbie. Oct. 16.

Lynn Elber is a national television columnist for The Associated Press.