Youth forum with Edwards will be open to public in Whitesburg 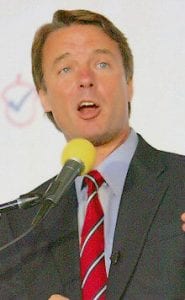 Democratic presidential candidate John Edwards will be in Whitesburg today (Wednesday) for the next-to-last stop of three-day “Road to One America” tour.

Edwards will take part here in a youth-led forum on drug abuse and other problems caused by poverty. The forum, which is open to the public, is scheduled to begin at 11 a.m. at the Appalshop Theater. Seating will be available on a first come, first served basis. Doors will open at 10:45 a.m. The forum will also be broadcast live on radio station WMMT-FM (88.7). Edwards is also expected to speak from the back of a truck in the Appalshop parking lot just before or just after the forum.

The forum is being hosted by the Appalachian Media Institute (AMI), a program which teaches young people how to use video cameras and audio equipment in making documentaries. The event will be hosted by former AMI student Natasha Watts and present student Machlyn Blair. Issues to be discussed include the prescription drug addiction epidemic, high rates of unemployment, and few opportunities for youth development. 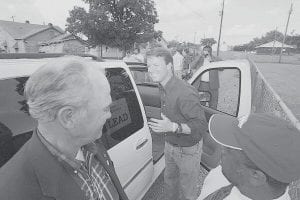 Democratic presidential hopeful John Edwards left a stop in Helena-West Helena, Ark., on Monday after speaking to home healthcare workers. He will be in Letcher County Wednesday. (AP Photo/Danny Johnston)

“This is a place where we sacrifice a lot to keep our families together: jobs, education, and health opportunities,” said Blair. “It’s devastating that we let addiction take our families from us. I look around my community and see how many people are out of a job, trying to get by working at Wal-Mart, or getting hurt in the mines. Knowing where I’m from is one of the most important things to me. I don’t want to have to leave, to give that up for a paycheck.”

Edwards will make stops in the southwest Virginia towns of Wise and Norton before coming to Letcher County. From here, he will go to Prestonsburg for an end-of-tour rally.

The tour began Monday morning in New Orleans, where Edwards took part in a town hall meeting aired on ABC’s “Good Morning America.” After stops in Mississippi and Arkansas, Edwards visted Memphis, Tennessee on Monday night, where he called on supporters to help start a citizens’ movement to fight poverty across America.

“It would be a wonderful thing if the president of the United States could solve all these problems alone. It is not the truth. It is a fantasy,” Edwards said. “If we want to bring about the bold change that can end poverty in this country, we need a movement.”

The 2004 vice presidential nominee’s tour is reminiscent of a trip Robert F. Kennedy took nearly 40 years ago. Kennedy also made stops in Whitesburg and Prestonsburg in the winter of 1968.

Stopping at a thrift store run by the Memphis Metropolitan Interfaith Association, Edwards offered few specifics on fighting poverty but said demands for change must come from ordinary Americans.

“Nobody in the United States of America should work full-time and still live in poverty, nobody,” he told a cheering crowd of about 300 listeners in Memphis on Monday night.

“People who are working and trying to do everything they can to support their families are living at or near the poverty level,” he said at the New Zion Community Center. “And that’s not right.”

Edwards called for an increase in the federal minimum wage to $9.50 an hour. A new law is already scheduled to boost the minimum wage from $5.15 an hour to $7.25 an hour over two years, with the first increase of 70 cents to take effect this month.

“We can do something about this by raising the minimum wage, by having paid sick leave, and by having universal health care. That would change everything,” Edwards said.

Edwards said east Arkansas is not unlike other impoverished areas on his tour.

“We have to create incentives for companies to locate in areas like this, tax breaks for companies that are willing to come to communities where poverty levels are high and jobs are desperately needed,” Edwards said.

Poultry plant employees in Canton, Miss., told Edwards they are not receiving full wages and can’t support their families on their paychecks.

Edwards said there was a false perception that many who live in poverty are “just ne’er-do-wells or they don’t want to work,” but the workers’ stories show that is not the case.

“They have a hard time paying their bills and supporting their families because, No. 1, their pay is low. No. 2, they don’t have the kind of benefits you would hope they’d have, and No. 3, they’re actually being cheated out of what they are entitled to and being forced to work in incredibly dangerous conditions,” Edwards said.

Edwards, who formally kicked off his race for the Democratic nomination in New Orleans in December, returned to the city Sunday for a tour of the Lower 9th Ward, a low-income area that was among the worsthit by Katrina.

On Monday, he took questions at the town hall meeting in the French Quarter then toured Kingsley House, a charitable agency that provides education programs and other services for children in need.

At each appearance he lamented the city’s slow recovery – its population remains down by around 40 percent and vast areas have yet to recover from post-storm blight. He said one of the federal government’s priorities should be finding out why billions allocated for storm relief have not reached local governments and storm victims. And he said President Bush should exercise more leadership in getting the problems solved.

The Bush administration says it has allocated over $110 billion to Gulf Coast hurricane recovery but local officials and storm victims say they have yet to see much of the money for needed infrastructure repairs.

This article was compiled from Associated Press and Mountain Eagle reports.