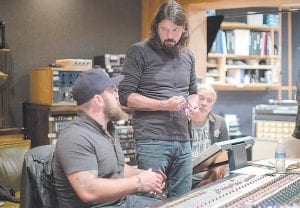 Zac Brown, left, and Dave Grohl, center, as seen in this photograph working on their new recording due out Dec. 10. (AP Photo)

You never know who you’re going to meet while waiting in line at John Varvatos’ store in West Hollywood. When Zac Brown bumped into Dave Grohl while picking up some altered clothes for the Grammy Awards, he didn’t let the random meeting go to waste.

They bonded over their love of analog recording gear, and their new friendship eventually resulted in Zac Brown Band’s newest release: “The Grohl Sessions Vol. 1.”

“I don’t know how I tricked him into working with us, but it’s really cool,” Brown said.

The four-song EP is due out Dec. 10 on iTunes. It’s the first of two planned releases produced by the Foo Fighters frontman and former Nirvana drummer. The second volume will come next year, along with physical releases, including vinyl and a documentary.

Grohl traveled to Nashville this month after a full-court press from Brown. They recorded four songs together in a week at the band’s analog studio, taking a break in the middle to perform one of those cuts, “Day for the Dead,” on the Country Music Association Awards. The EP will include two other original songs and a cover of The Wood Brothers’ “The Muse.”

In his first interview about the project, Brown said Grohl wasn’t familiar with the band when they met. Brown and members of the seven-piece Atlanta group sat in front of Grohl at the Grammy Awards a few days later, though, where they won country album of the year. Brown and Grohl became friends. Now Brown hopes Grohl can help take his band to a different audience.

“ They just know we’ve had some songs on country radio,” Brown said of most listeners. “And while we’ve got a great foothold in country music, that doesn’t encompass everything we do. Dave Grohl’s street credit and the energy that was brought into these recording sessions, it’s a big deal for us. I feel like it’s kind of the tipping point.”

Brown is releasing the EP on his Southern Ground record label and says the experience has been so positive this approach may be the band’s preferred method going forward. He loves that the music will be out just a month after it was recorded.