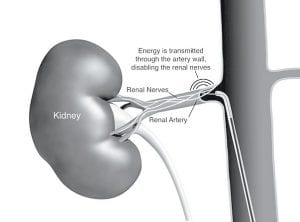 Some people who couldn’t get their blood pressure under control despite taking a fistful of pills every day found relief from an experimental treatment that shows promise as a permanent fix for the condition.

The treatment uses radio waves to zap nerves near the kidneys that fuel high blood pressure. It is done through a tube pushed into a blood vessel in the groin, much like the angioplasty procedures for opening clogged heart arteries.

In a study of about 100 people, the top number of the blood pressure reading fell an average of 33 points among those who had the treatment. Doctors say that is much better than the less-than-10-point drop that many drugs give.

“I am extremely interested in this,” said Dr. Elliott Antman, a Brigham and Women’s Hospital cardiologist who is vice chairman of the American Heart Association conference in Chicago, where study results were reported last week.

Even if the treatment doesn’t wind up being a cure and is only partly successful, that’s still beneficial because these people are at grave risk of heart attacks, strokes and death, and drugs are not helping them enough now, he said.

The fact the treatment also improves blood-sugar control makes it especially attractive for diabetics with high blood pressure. “This opens up a dramatic new option for them,” Antman said.

About 75 million Americans and 1 billion people worldwide have high blood pressure — readings of 140 over 90 or more. Most people need three or four drugs to treat it, and only about one-third are well-controlled on medicines. About 10 percent are unable to achieve control despite taking many drugs that relax the blood vessels and prevent water and salt retention.

The new treatment damages certain nerves and cause key arteries to permanently relax. It is being developed by Ardian Inc., a private company based in Mountain View, Calif., whose investors include medical device giant Medtronic Inc. It was approved two years ago in Europe and just coming into wider use now as doctors there get trained to do the procedure.

In Europe, it costs about $14,000, but no U.S. price has been set yet, said Ardian’s chief executive, Andrew Cleeland. A study aimed at winning U.S. approval will start early next year, and about 200 U.S. medical centers have called unsolicited to ask to be part of it, he said.

Dr. Murray Esler of Baker IDI Heart and Diabetes Institute in Melbourne, Australia, led a company-sponsored test of it in 106 people whose blood pressure top number averaged 178 despite taking an average of five drugs.

After six months, 84 percent of those treated had drops of at least 10 in the top number, and 39 percent had blood pressure below the 140 threshold for defining high blood pressure.

“The safety was very good,” with only one patient developing too-low blood pressure, Esler said.

Results also were published online by the British journal Lancet.

In an earlier pilot study, the blood pressure of patients who had the procedure at least 2-1/2 years ago remains improved, Esler said.

Esler said that as a young man 40 years ago, it was his dream to cure hypertension. “At least we have a device that is moving toward that,” but curing the condition so people no longer need any drugs “is still probably a dream,” he said.

“It seems too good to be true” that a procedure might cure high blood pressure, something doctors have long hoped for, said Dr. Mariell Jessup, head of the heart failure center at the University of Pennsylvania chair of the heart conference. Patients need to be followed for a long time to make sure the benefits last, she said.

They have so far for Dorian Blair, 37, a father of five who lives in Cleveland. Blair has a strong family history of high blood pressure, and said he has suff ered five heart attacks and mini-strokes in the last five years or so. His blood pressure was in the 180 to 190 range, occasionally topping 200, when he had the nerve-zapping treatment last December. That number now is around 140, “which is pretty good for me,” he said.

“It was a simple procedure. I was up and walking around a day later.”