Zero-calorie drinks no match for water 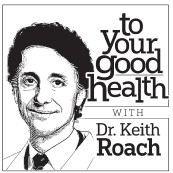 DEAR DR. ROACH: I walk 30-60 minutes about four times a week and drink several times from a water bottle that I carry with me. Would it be OK to occasionally substitute caffeine-free diet soda for the water?

ANSWER: I’ve talked a few times about diet soda, and the controversy about whether it helps people lose weight or whether, despite having zero calories, it makes people more likely to gain weight. There has been evidence for both.

A recent and fascinating study was published showing that artificially sweetened beverages predispose a person to higher blood sugars, and that the effect was due to changes in the bacteria in our gut (called the microbiome). These bacteria have become the focus of intensive study of how important they are for our overall health.

I recommend against habitual use of artificially sweetened beverages. Occasional use of diet soda is unlikely to harm much; however, water — still or bubbly, plain or with a wedge of fruit — is the best and most natural way to hydrate.

DEAR DR. ROACH: I am 68 years old, and will be having bypass surgery soon. After my surgery, will L-arginine be good for my heart? I know I will be walking every day. — G.J.S.

ANSWER: L-arginine, an amino acid, has been shown to increase nitric oxide in blood vessels of people with high blood cholesterol and blockages in their arteries. There are two studies I know of that showed no effect from arginine on blood flow or inflammation. On the other hand, one study showed that supplements of arginine, along with phytoestrogens, B vitamins and vitamins C and E (as part of a medical nutrition bar) in people with angina improved some blood flow measurements and the ability to exercise on the treadmill. It also has been shown to have some benefits in people with heart failure.

Based on these studies, I don’t recommend arginine after cardiac bypass surgery. However, there may some benefit, and since it is unlikely to be harmful, I wouldn’t try to dissuade someone who wanted to give it a try.

DEAR DR. ROACH: I had radiation treatment in 2011 for a goiter. I know tanning beds are very dangerous, but are spray tans dangerous for me? — V.

ANSWER: Dihydroxyacetone, the most common coloring agent in spray-on tans, is generally considered safe, but you should avoid getting it around your eyes, mouth and nose. There is some controversy, but the Food and Drug Administration has considered it safe.

The radiation treatment for goiter slightly increases risk for cancer, especially leukemia. I think it reasonable to do what you can to reduce cancer risk, but I don’t think tanning spray is a big risk.

Dr. Roach regrets that he is unable to answer individual letters, but will incorporate them in the column whenever possible. Readers may email questions to ToYourGoodHealth@med. cornell.edu. To view and order health pamphlets, visit www.rbmamall.com, or write to Good Health, 628 Virginia Drive, Orlando, FL 32803. ©2016 North America Synd.