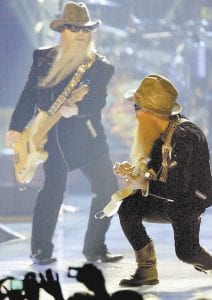 Billy Gibbons, right, and Dusty Hill of ZZ Top are photographed here performing May 12 during the VH1 Rock Honors concert at the Mandalay Bay hotelcasino in Las Vegas. Gibbons and Hill brought their gold guitars with them to eastern Kentucky five days later for a performance in Pikeville. (AP Photo/Isaac Brekken)

The region was treated to a first class rock and roll show last week when ZZ Top took the stage at the Eastern Kentucky Expo Center in Pikeville.

From the moment the trio’s two front men – guitarist Billy Gibbons and bassist Dusty Hill – took the stage wearing matching sequined black suits and dark sunglasses, it was clear that the crowd was in for a treat. After all, the May 17 show marked the first time the year-and-a-half old Expo Center hosted a band that has been inducted into the Rock and Roll Hall of Fame.

The Pikeville concert was ZZ Top’s first appearance on stage since being honored by VH1 in Las Vegas five days earlier. That, combined with the news from just one day earlier that a European tour scheduled for June was being canceled so that the 58- year-old Hill could be treated for a growth in his inner ear, might have been reason for some fans to fear the band might not be up to its best. Any such fear was erased early in the show.

While the concert looked to be nothing more than “business as usual” during show openers “Thunderbird” (from the 1975 album Fandango!) and “Francene” (1972’s Rio Grande Mud), the band clearly picked up the intensity after the audience responded overwhelmingly to the classics “Waitin’ For The Bus” and “Jesus Just Left Chicago” from 1973’s Tres Hombres. From that point on, few people remained in their seats as Gibbons, Hill and drummer Frank Beard (the only member of the band without a beard) tore through favorites like “I’m Bad, I’m Nationwide,” “Beer Drinkers and Hell Raisers,” “Cheap Sunglasses” and “Pearl Necklace.”

Among the highlights of the concert were the band’s guitar workouts on the early Mississippi Delta standard “Catfish Blues” and their own “Brown Sugar” from First Album in 1970. Gibbons’ excellent slide work while playing a completely gold Gibson Les Paul guitar and Hill a gold bass on 1972’s “Just Got Paid” was another bonus.

With Gibbons and Hill setting the stage on fire with their signature synchronized playing and “dance” moves, the crowd grew even more excited when the band began playing the hits from its days as MTV superstars in the Eighties – “Under Pressure,” “Gimme All Your Lovin'” and “Legs,” on which Gibbons and Hill played a guitars with white fuzz. The sharp dressed band (Gibbons’ suit was augmented by a pair of brown Red Wing work boots that looked like they’ve been around since he was singing about oil and gasoline on blue jeans in 1975) got the audience so worked up with its blazing rendition of “Sharp Dressed Man” that one woman removed her bra and threw it on the stage.

The 90-minute show ended with an outstanding encore medley of “La Grange” and “Tush.”

The concert’s opening act was Blackberry Smoke, a young southern rock band from Atlanta which counts as its influences Lynyrd Skynyrd, The Rolling Stones, Big Star, The Black Crowes, and Gram Parsons. They played for about 50 minutes, all the time respectfully aware that the audience was there to see “That Little Ol’ Band from Texas.”

In addition to the excellent “Train Rollin” and other songs from its debut album Bad Luck Ain’t No Crime, the band also played selections from its coming sophomore effort. The highlight

was “I Can Feel a Good One Coming On,” a tribute to working people with too little time off taking some well earned relaxation with two six-packs, a butane lighter, a pack of Luckies, and Ray Wylie Hubbard on the CD. Blackberry Smoke held their own and once again proved why it’s not a good idea to skip the opening act. (The band is scheduled to perform in the region again on June 8 at Blue Cats in Knoxville, Tenn., as the opening act for Cross Canadian Ragweed).

The fact that a Rock and Roll Hall of Fame band like ZZ Top didn’t sell out the Expo Center proved to be the evening’s only disappointment. While the crowd still was large and ranged in age from very young teens to those in their upper-sixties, it’s hard to believe that more people didn’t take advantage of the opportunity to see one of the top rock bands of the last 30 years – a band that, even though it no longer brings live buffalo and longhorn cattle onstage, is still one of the outstanding performance acts in rock today.

The 7,000-seat Eastern Kentucky Expo Center is an extraordinary venue considering that 10 years ago it was just a plan by then-Governor Paul Patton for improving the quality of life in the region. The center is welcoming and can present concerts, basketball games, and other events such as a recent presentation of the Ringling Brothers and Barnum & Bailey Circus.

While rock aficionados still must travel long distances to see the absolute top name acts like The Who and The Rolling Stones, it is now possible to see first class entertainment right in Pikeville. When an opportunity such as the Eastern Kentucky Expo Center knocks, everyone should answer the door, because it wasn’t that long ago that a trip to Pikeville may have included dinner and drinks, but never a show like the one ZZ Top put on last Thursday night.