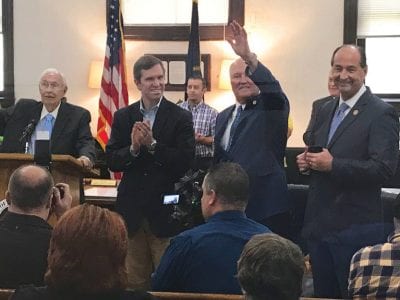 On his fourth trip to eastern Kentucky since his election in November, Gov. Andy Beshear said he came to Whitesburg not bearing gifts, but bearing rewards. “We brought four checks, so it’s going to be a good afternoon,” Beshear told the crowd in the Whitesburg City Council chambers. But he added that the checks represent the culmination of hard work […]

Whitesburg Hospital is one of five Appalachian Regional Healthcare facilities named to the American College of Emergency Physicians’ Emergency Quality Network Honor Roll. ARH and the other 2019 Honor Roll awardees have been recognized for their achievements in improving outcomes for sepsis patients and reducing opioid-associated harm through safer prescribing and the implementation of evidence-based interventions. The ARH facilities included […]

Board of Health to meet

The quarterly meeting of the Kentucky River District Board of Health will be held at 6:30 p.m., March 10. The meeting will take place at the Kentucky Area Development District Conference Center at Perry County Park in Hazard.