After getting my Real ID, I have one question. How did state screw up so badly?

When an editor suggested I apply for a Real ID and write about how difficult the process was, I thought it wasn’t a bad idea. At the very worst, I get paid for spending the better part of the day doing something I’m going to end up doing on my own time anyway, and Gannett reimburses me for the gas […]

Children of EMT’s, paramedics killed on duty would get free college tuition

The General Assembly may consider many bills during a legislative session, but in even-numbered years, none are more important than the Executive Branch budget. While preliminary work has been going on for months, it wasn’t until earlier this week – when Governor Beshear presented his first-ever budget proposal – that legislators had something in hand. Now, over the next two-plus […]

A reminder of our common bonds 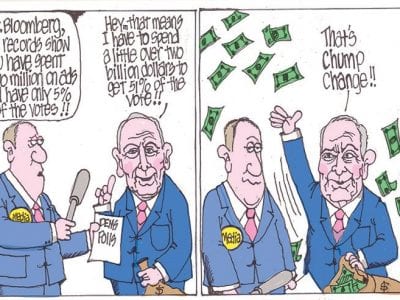 There is a new governor, and it is a new year in Frankfort as members of the Kentucky General Assembly returned to the Capitol to convene for the 2020 Regular Session. Though the first week typically consists of introducing bills and resolutions, it will only be a matter of time before we delve into some daunting tasks that are of […]

In one sense, the start of last week’s legislative session was not much different than my first three as a state representative. It was exciting as my House and Senate colleagues and I arrived at the Capitol, and it was a little daunting as I considered the amount of work in front of us. In a couple of important ways, […]

Throughout the unsettling conflict with Iran, Joe Biden stood out as a calming Democratic voice, speaking of the stakes and challenges with deep knowledge of foreign policy. Just another reason for activists on the left backing Bernie Sanders or Elizabeth Warren to lose their minds. The news for them hasn’t been great of late. Biden is now tied with or […]