Bluegrass group to perform at Norton

Between ‘inspiration’ and knowing how to fix health care

Why so many Americans want their president to be a personal motivator and religious guide vexes me. You do want a leader with dignity and self-control, but attending to the economy, national defense, foreign affairs, the environment and other aspects of the public’s well being should be a full-time occupation. For these reasons, I find President Bush’s moral mouthing and […] 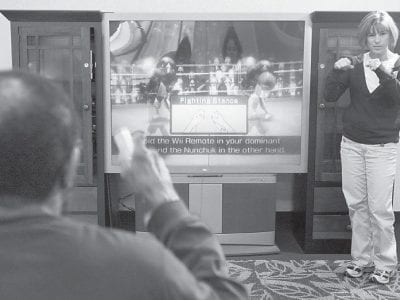 CHICAGO Some call it “Wiihabilitation.” Nintendo’s Wii video game system, whose popularity already extends beyond the teen gaming set, is fast becoming a craze in rehab therapy for patients recovering from strokes, broken bones, surgery and even combat injuries. The usual stretching and lifting exercises that help the sick or injured regain strength can be painful, repetitive and downright boring. […]

Greetings from the hills and valleys of Eolia and Eolia Christian Community Outreach. He will not allow your foot to slip; He who keeps you will not slumber. Psalm 121:3 By now I suppose most folks in the community are aware of the tragic accident that happened to Marie as she and Sheldon were heading back to Pennsylvania. They stopped […]