• Here’s another great clothespin tip: “Clothespin plus dish towel equals baby bib (or Uncle Frank bib, in some cases).” — T.R. in Missouri • “To hand-wash clothes, fill a washer with water and add detergent. Add clothes that you need to hand-wash, and let run in machine 1 minute or less (longer if soiled). Then take the clothes out […]

Growing up near a river with four brothers, we did a lot of fishing in our spare time. We still like to fish, and we fish together as much as our schedules will let us. One summer we were fishing the Cumberland River above Harlan. We were fishing the rocks for red-eyes. We were using small crawfish and dropping them […] 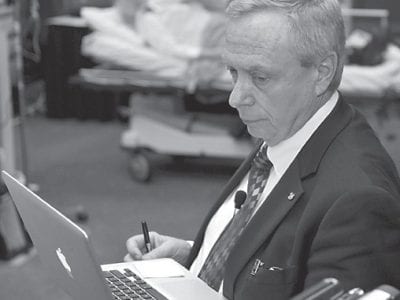 MILWAUKEE He seemed like Superman, able to guide jumbo jets through perilous skies and tiny tubes through blocked arteries. As a cardiologist and United Airlines captain, William Hamman taught doctors and pilots ways to keep hearts and planes from crashing. He shared millions in grants, had university and hospital posts, and bragged of work for prestigious medical groups. An Associated […]


Funeral services for Myrtle Johnson, 87, will be held at 1 p.m. today (Wednesday), December 15, at McRoberts Missionary Baptist Church. Burial will be in Haven of Rest Cemetery at Mayking. A daughter of the late John and Norma Belcher, she died December 12 at her home at McRoberts. She was the widow of Fletcher Johnson, and a sister of […]

Until next year, happy holidays …

It’s cold outside, hunting season for all practical purpose is over, and I’m looking for a place to fall apart. Spring turkey season starts on March 19, and that is a long time in the life of a hunter. As we close this year, I want to reflect on some of the fun — and not so much fun — […]

Richard Holbrooke was a legend, the high priest of what we used to call the “priesthood” (even though they finally did let Madeleine in), the foreign policy elite that played musical chairs whenever a Democrat was running for or elected to the presidency. Arrogant? You bet. Frustrated with those who didn’t get it, wouldn’t do it, didn’t push themselves as […]


The Fleming-Neon Elementary School kindergarten class, taught by Bill Stanley and Nancy Ratliff , has submitted letters to Santa Claus. Here is what the children wrote: I am 5 years old. I am in kindergarten at Fleming Neon Elementary. My teacher is Mr. Stanley. I have been good all year. For Christmas I would like you to bring me a […]

Hello everyone. Hope all had a good week! It is snowing as I write this. Hopefully we don’t get as much as the weather guy has predicted. I really don’t mind the snow, it is the real cold temperatures that come along with it or all the ice. We lost another neighbor from Cowan, Vivian Adams died. She was married […]

LEXINGTON The state health department is recommending all Kentuckians get vaccinated against whooping cough. The recommendation comes after the number of recorded cases of the bacterial infection has jumped from 47 in 2007 to 250 in 2010. The Lexington Herald- Leader quotes the state health department as saying especially vulnerable are children younger than age 1. Whooping cough, also called […]