The Blackey Improvement Committee started in March talking about what we could do for a fundraiser for our Blackey Day festival. Someone suggested a dinner show and at the time some of us knew very little about a dinner show. But a committee was formed and Richard Smith agreed to write the script, and a few very talented committee members […]


Federal regulators have announced that nearly all dust samples from the nation’s coal mines were in compliance with limits that were newly toughened to cut miners’ exposure to particles that can cause deadly black lung disease. Citing the Mine Safety and Health Administration, the Lexington Herald- Leader reports that about 99 percent of the 20,000 dust samples collected were in […]

How to beat the heat while fishing

While it is the heat of summer for sure outside — and will be for a while — we who love fishing have to find ways to fish at times when it is not so hot out. There are several options, such as fishing early and late or at night or going wade fishing. Just before or while its raining […]


Funeral services for Madonna Tackett, 62, will be held at 1 p.m. today, July 20, in Whitesburg. Burial will be in Green Acres Cemetery at Ermine. Born in Whitesburg to the late Charles “Cigar” and Mella Johnson Anderson, she died July 17 at Whitesburg Appalachian Regional Hospital. The widow of Robert Griffith, she was later married to Stanley Sexton and […]

Hello everyone! Hoping everyone is doing well. We have had lots of rain but that’s okay, especially if it cools us down from the hot weather. Looks like most of the gardens have turned out well. I have been going to the Farmers Market and so far I have gotten greasy beans, tomatoes, cucumbers, potatoes, zucchini, watermelon and cantaloupe. Kind […] 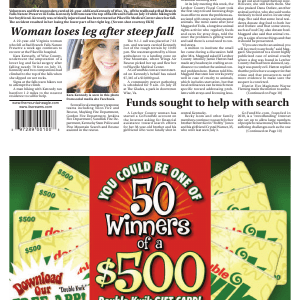