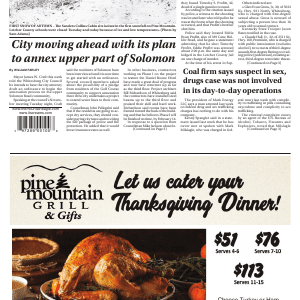 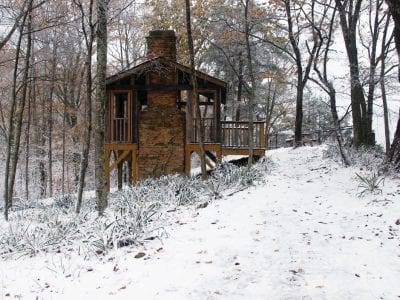 – The Sanders Collins Cabin sits isolate in the first snowfall on Pine Mountain. Letcher County schools were closed Tuesday and today because of ice and low temperatures. (Photo by Sam Adams)

The Letcher Grand Jury has named Eddie Ryan Profitt, Jr., 44, in an indictment charging him with murder in the shooting death of his brother. Kentucky State Police Post 13 in Hazard received a 9-1-1 call at 4:43 a.m. September 10 that a man had been found unresponsive in the basement of a house at 339 Cane Hollow. When troopers […]

Mayor James W. Craft this week told the Whitesburg City Council he intends to have the city attorney draft an ordinance to begin the annexation process on the upper Solomon Road community. Speaking at the council’s November meeting Tuesday night, Craft said the residents of Solomon have been interviewed and it is now time to get started with an ordinance. […]

Coal firm says suspect in sex, drugs case was not involved in its day-to-day operations

The president of Mark Energy LLC says a man arrested last week on federal drug and sex trafficking charges has nothing to do with his company. Kenny Spangler said in a statement issued last week that he has never met or spoken with Mark Milslagle, who was charged in federal court last week with complicity to trafficking in pills containing […] 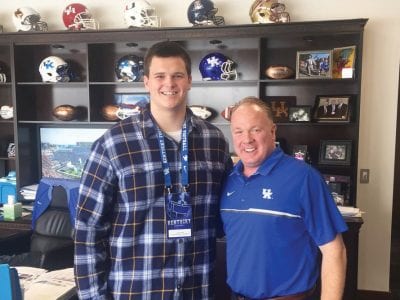 Stoops tells recruits he is staying at UK

Asked who he thought would be a likely coaching target at Florida State after the Seminoles fired Willie Taggart, ESPN college football analyst Kirk Herbstreit said an “obvious” choice would be Kentucky coach Mark Stoops. He noted how Stoops had been a successful defensive coordinator at Florida State before coming to Kentucky where he has now taken UK to three […]

At the lodge and ready to hunt

Well, we got to the lodge, just under the wire. I have never seen so many new, white, four-wheel-drive GMC’s lined up at one time in my life, except at a dealer’s lot. Wow. ey Th were ready to pull out to take us to the shooting range to make sure we knew how to handle our weapons, and could […]

Fishing when lakes ‘turn over’

This is the time that most lakes are in the turnover time. This is when the warmer water on top now will go deeper and the cooler, deeper water will come up and trade places. The turnover is common on most lakes in mid spring and in late fall. The lake kind of rolls over and the signs of this […]

Letcher County Central ended its 2019 football season with a 4-7 record after a 49-7 first round playoff loss to undefeated Johnson Central. Johnson Central received the ball to begin the game and quarterback Riley Preece scrambled for a 22-yard gain on the first play. On the ensuing play, Preece under-threw a deep route that tipped off a LCC defender’s […] 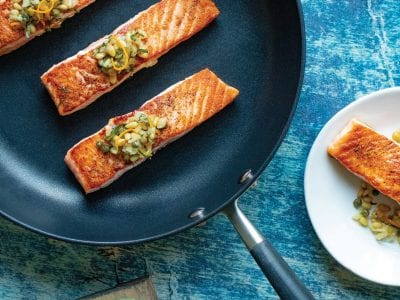 The rush of the holiday season – shopping for gifts, decorating the house, hosting loved ones and other added obligations – can be challenging. Restore balance and holiday cheer by treating yourself and others who are home for the holidays to a no-fuss, relaxing dinner that feels celebratory. Supported by a menu that can be prepared entirely using a skillet, […]